I can always find them 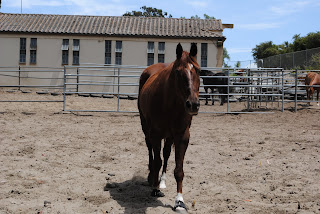 Really, no matter where I go, I can find horses. Of course, that's undoubtedly because I'm as horse-crazy as a 12-year old girl and go looking. Be that as it may, I find them.

In New York, I accosted carriage horses. In Portland, I once chased down a mounted police officer--possibly mildly alarming him. In Austin, I snuffled noses with several big draft horses pulling carriages. In Las Vegas, I went to the Tournament of Kings show at The Excalibur just to see ponies.

I suppose one could reasonably call me obsessive.

Steve and I spent quite some time in Golden Gate Park this weekend, and I managed to find horses there, too.

The Polo fields are more like soccer fields these days, but my nose told me there were still horses nearby and lo and behold, the SF PD keeps a stable there, too!

The horse above was the most gregarious of the bunch, but I obeyed the signs and did not dispense treats--much to his dismay.

This was the first time either Steve or I had really explored the park and it seems like a great place to ride, but we haven't found evidence that's allowed for non-Police persons.

We did find evidence (aka road apples) that horses had been out in the park a few places, though perhaps they were on official business only. Ma'am.
Posted by Jessica Boyd at 8:28 PM

Haha! I'm the same way, I'm great at finding horses in places you wouldn't normally think of finding horses. We went to Disney World one time, and while most people insist on going on amusement-park-type rides, I insisted on going horse-back riding! That's just how it goes! LOL

Or maybe it's my overactive imagination.

I went to Sea World in southern Ca and found horses. Sea World is owned by Budweiser. They have a beautiful (HUGE) barn. I saw a baby clydsdale, their donkey friend and watched them hitch and parade the team. One of three teams lives there when not on tour.