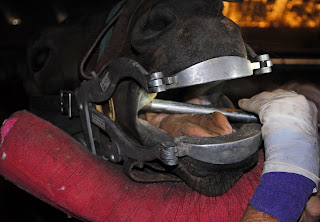 A healthy mouth is almost as important as good feet in a horse, so we try to stay on top of their dental work. This year, we were a little behind--especially for Bar--but finally got it done on Friday.

As I related after last year's dental day, Lena has a great mouth and Bar has an okay mouth. His wave wasn't as bad this year, but he does actually have a bit of an overbite and that causes the rostral and ventral hooks to show up.

Over an hour and four shots of drugs later, he was in good shape, but it will be better to do him every six months instead so the duration isn't so long each time. His jaw was pretty tired and that's a lot of sedation to put him through, poor guy. Leslie is kind enough to price according to how much work she does and how much time it takes, so the cost won't really increase, it will just be spread out. 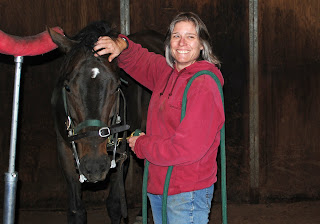 Bar wanted out of the stall so badly, I could guide him out almost immediately--though we did rest a little on the way back to his paddock as he came up from sedation. Lena made us wait while she napped a little, though she had seemed to be waking up as Leslie finished up. And she only got two shots! 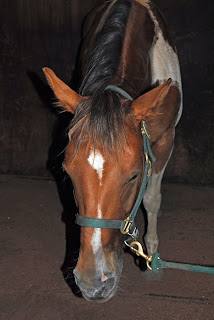 Glad it's done, though, and it will probably be easier--in a few days, anyway--to get a bit back in Bar's mouth. A couple people have commented that he will probably move better, too, so it will be interesting to see if that is another bonus from all this. Certainly if he isn't protecting himself from the bit, that makes a lot of sense.

All in all, it is a necessary thing for a happy, healthy horse. And it's kind of funny to watch 1,200 pounds of stoned beastie, too.
Posted by Jessica Boyd at 5:13 PM