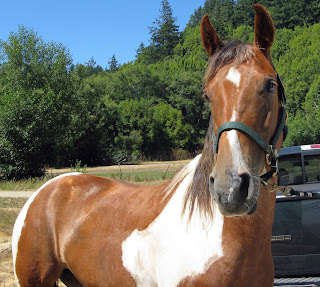 In all the time we've owned Lena, I don't think I've ever forgotten to celebrate the anniversary of her coming into our lives.

Only I did this year!

What a bad horse mommy.

Since her last bout, we've succeeded in getting her out more and I've been able to do some acupressure on her on a fairly regular basis.

Call me crazy, but she seems calmer--both when eating (less frenzied swooshing of grain in her bucket) and in general. Out on the trail, she was curious and alert, but went up and down hills, over bridges, and past several things that normally make her leap sideways and snort.

She has been a wonderful, beautiful, spotty teacher and giving back some level of serenity to her seems like the least I can do. Thank you, Lena Rey!
Posted by Jessica Boyd at 6:37 PM

Email ThisBlogThis!Share to TwitterShare to FacebookShare to Pinterest
Labels: colic in horses, horses in general, Lena