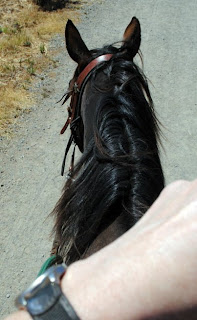 Reading a recent post on one of my favorite blogs reminded me of a topic buzzing around in my head since Sunday's awesome trail ride.

I am still afraid to canter the big, brown Thoroughbred. At least while I'm in the saddle, and apparently only in the arena.

And if I'm at all honest with myself--always a good plan--I'm still afraid some of the time just riding him. Not when we're on the trail, just in the arena.

This really makes no sense.

The arena is a fairly controlled environment. The trail has a host of unnamed surprises that can (and do) leap out at any moment. Dogs. Small children. Fishing poles (which look like lunge whips). Really, any combination thereof--and more--can occur. (I've seen it, trust me.) So why (why?!) can I relax in the saddle as we trot (and sometimes canter) up the trail and the mere indication of an increase of speed in the arena causes breath-holding?

Most--in fact nearly all--of our serious accidents have been in the arena. However, our very first trail outing was short-lived and terrifying (particularly for Steve) because I slid off and underneath a rearing horse. Only the big brown horse did everything imaginable--even panicked as he was--not to step on me. And I had no idea how bad it looked at the time, either--apparently quite bad if the look on Steve's face was an accurate gauge.

But it is the arena that causes me the most consternation.

I know this, so I take extra steps to deal with my neurosis. I babble to Bar in the arena. He tolerates it because it's better than breath-holding. I know I should hum or sing, but sometimes babbling is what comes out instead.

To his credit, many months have gone by since he has given me any reason to doubt he's taking care of me. When I get out of balance, he stops. When he does speed up without permission, the most I have to do is a gentle one-rein stop--usually because I'm too far forward and I've confused him--and mostly a tap on the outside rein is sufficient.

He likes it when I get on his back, for crying out loud!

No doubt part of it is that both of us have minimal fun in the arena. Ideally, we'd live somewhere that would allow us to point our noses off the property and run up and down trails instead of doing dumb ovals. However, I think it's important to ride him regularly and keep him in shape before asking him to climb over hill and dale, so we have to do arena work even if it sucks.

So we are stuck with the arena.

I haven't figured out exactly how to do that, yet, but I have a deadline in mind. We are all (Steve, Lena, Bar, and me) going up to Slide in October and I'll need him to work with me in the arena by then. Or rather I'll need to be able to relax enough to keep him focused in the arena--a new arena in a new place--so we can learn a few things from Ike and Cheri.

Of course, we'll also have the trails up there to give us a good break. Hm. I wonder if he'll want to come home.

I wonder if I'll want to come home.
Posted by Jessica Boyd at 9:28 PM

These things are learned, and can be unlearned. Just pretend you're a horse who has this worry, and figure out ways to train yourself out of it by edging up on your worry slowly and building your confidence. Do something you're completely comfortable with, then add one little thing until you're comfortable with that, and so on. Pretty soon I bet you'll be retrained! And think of ways for arena work not to be boring - it doesn't have to be.

Kate, you are absolutely right about the finding fun stuff to do in the arena--I've done it with both horses a lot! I think I'm just overly frustrated with myself at the moment.

Maybe when you are in the arena you feel the need to be more correct and worry more, and that might be causing the problem. It's hard to relax when you are thinking "Oh heck, I have to do this correctly" even if it is on a subconscious level. When you are on the trail, it's just you and your horse having fun and that makes it easier to relax. I seriously hope that you can conquer this.

I'm late to this, but thought it would help.

For me I over think everything and before I know it, my confidence is gone. Try doing something that requires you to look ahead and not hyper focus - riding to a pole on the other side, for example.

Just do it as if you were riding to another tree on the trail. Think in your head this simple thing you want to do and just feel your body move with your horse.

I think Kippen is on the mark. In the arena we are concentrating on work, and when things don't go quite right, the frustration level can rise. Which in turns causes frustration for the horse. On the trail, we are more relaxed, enjoying the experience. Hence the animal relaxes.

99% of the goofy, spooky things that Smokey does are in the arena. He is like a different horse on the trail.

Unrelated to the trail/arena convo...
but..

Something I've learned in the past few weeks: they are far more steady and easy to ride at the canter/gallop. They are enjoying themselves, they are focused on forward motion. It's at the jog when they find time to notice things, spook at things.

I'm starting to believe that the faster we ride, the safer we are.