Finally back out on the trail 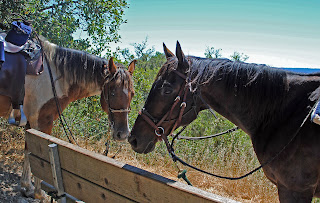 So long, in fact, that my pre-trail ride anxieties were humming along at their funny little two-year ago buzz level until everyone was safely loaded and we were on our way.

Bar was first to load, since we've determined Lena rides better in back and he had graciously accepted the front compartment so long as we were getting away from the arena. Granted, it's been awhile, so when he didn't immediately into the trailer, I wasn't overly concerned. We did a couple circles, re-approaches, and I was still getting hesitation. Odd. I knew playing tug of war was not going to work, so I stepped to the side and pointed into the trailer.

He loaded. Stepped right up into the trailer, no hesitation, no dancing, nada.

I was reminded of Katie when she was little, wanting to do things herself: "My do it!!" Great. 1,200 pounds of toddler. But! He loaded, so it is hard to be grumpy about how it happened. In fact, I'm rather pleased.

Lena practically skipped in behind him and we were off.

We didn't go far, just to a local park that has hills and bridges, children, dogs, and fishing--good mental and physical challenges for both horses. In particular, we wanted to see where Bar is at physically with his knee and his stamina before trying some tougher rides.

He got tired and a little sore, but he was good and I could feel him starting to use his hind end, really get it underneath himself, as we went downhill. He reverted back to not wanting Lena to get too far away from him, like he was when we first took them out, but that seemed pretty normal. The only time it was an issue was when he would start to rush going downhill to keep up, but he paid attention to my body language and voice and settled out when he needed to.

Lena was less spooky than she has been in a long time--even going past dried out bushes of doom she barely batted an eye. She did kick back at Bar once, but he did have his nose way too close to her rear end so it was sort of deserved. And she missed--likely on purpose--so no harm, no foul. Being no dummy, Bar kept his distance after that.

It was a good outing after so long, both for Bar and for me. My arm is a little tired and his knees are a little sore, but I think both of us would rather be sore from the trail than from the arena any day. 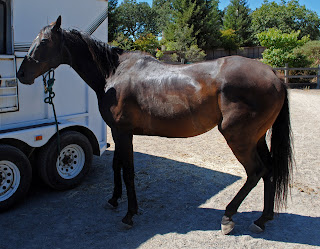 Loading him back into the trailer we had the same issue--apparently I now have to stand to the side to get him to climb in. Maybe I've trained him to well not to come over the top of me? Who knows. Lena also regressed a little, acting nervous like we'd drive off without her, which set Bar off as I loaded him and closed the divider on his butt. Luckily, we got everyone in and settled before they shook the trailer apart.

After we go out a few more times, I expect they'll remember we always leave with both of them and we always come home, but it may take a few outings to get back there. 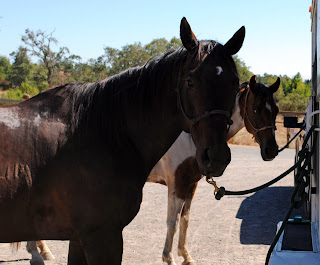 Sounds like a great outing for all! Must be nice to be out and around again.