Forrest's big day at the races 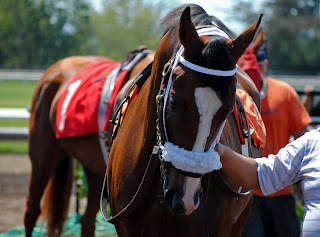 The people we got Bar from are still in the racing business, and just so happened to be racing their 4-year old in his first race in Santa Rosa Sunday. We got to go hang out on the backside and watch him get ready, then see him off to the track. Pretty cool stuff.

Forrest View is a nice looking horse with a calm demeanor and expressive face. He wasn't really sure what was going on today, but he was game for it. He was up and curious, and bounced towards the track, ready to release all that sproing-y energy. 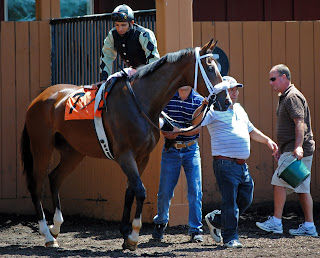 It was a short race, only five furlongs, and on turf--several new variables for Forrest. Like all their current horses, he's much more of a longer-distance horse, and he'd never been on turf before, but he had to start somewhere and he did alright. He broke with the other horses, but then hesitated a little and lost ground. He made up some but by then there was no more race to be run and he finished 8th out of 10 horses. Then, of course, he was hard to pull up. "Is that it?" he seemed to say, "But I'm just getting started!"

He wasn't even breathing hard when he got back to the paddocks for his bath and cool down, and kept looking back at the track from the hot walker, maybe to see what he was missing. Devin and Howie were happy to get that first race out of the way and all in all were pleased with Forrest's debut. 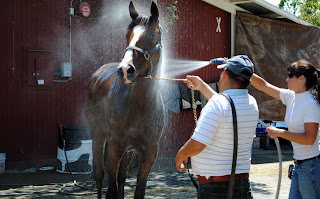 So much more to write, but the photos will have to suffice for now.
Posted by Jessica Boyd at 10:10 PM

He's a handsome boy - too bad he's not up for adoption yet!

It's great to read about a horse getting their first race start at the age of four. Nice looking horse. He'll make a super nice riding horse later on.

Anybody looking for a nice horse with lots of energy but a sweet disposition can feel free to get a hold of me at the end of Forrest's racing career! I am always looking for a good home for my horses!

Forrest is a beautiful horse and Devon says he has lots of energy and a sweet disposition, so he should have a nice racing career. And then a good home. You're not planning to add to your menagerie, are you?

And, to repeat myself, I now know more about horses than I ever cared to know!