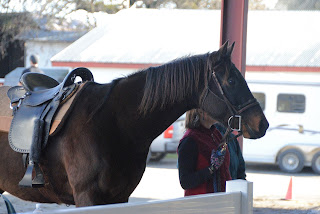 Calabar and me, watching Lena and Steve as we wait our turn at the clinic a couple weeks ago.

Calabar, like most horses, is very concerned with the world around him, sometimes too concerned. We have worked a lot on learning that it's okay to be concerned, but let's just keep moving on to the next thing, shall we? Letting him see what's going on is mostly a good thing--provided you can quickly distract him should that be necessary. "Yep, that's a horse running around over there but it's nothing to worry about! I'm not worried, and you're okay and safe right here. With me. Let's go do this other thing, now, 'kay?"

Then we step away from the shiny object, whatever it may be, and go about our business. But what if the shiny object is actually the reward, as was the case with Lena at the clinic?

At the clinic, in a strange setting, he really wanted to be with the spotty object of his affections. It didn't help that she was calling out to him incessantly. "Yes, I know you're worried and we're in a new place and she sounds terrified and lonely. You still can't go crazy."

So we circled one way, then the other, over and over. As soon as he stood still, he could go look over the rails of the round pen at her or at the horses in the lesson group above us. It took a few rounds of this--and I wish I'd known the puddle in the round pen wasn't deep so I could have let him off his lead rope--but he did settle down. (I didn't check the puddle and only determined its depth the next day when Forrest showed us by splashing through it with great flair and panache--and absolutely no fear--that it was only an inch or so deep.) Luckily, my lead rope is long and Calabar and I have established that much is allowed as long as it happens all the way at the end of that lead rope--far, far away from the tiny human in the middle.

He actually calmed down long before she stopped calling for him, so I let him eat grass until she stopped hollering and started paying attention to Steve and Ellen. That's when we finally headed over to watch and wait for our turn.

These two horses are a herd and look to each other for reassurance. That's normal behavior and perfectly natural. It's up to Steve and me to shift that focus onto us as the leaders, so we have to earn it. Staying calm, not over-correcting Calabar, and only allowing him to get to Lena once he'd calmed down, seemed to work pretty well.

There is, however, always next time and always more work to do.
Posted by Jessica Boyd at 3:19 PM