Can horses have PRSD? (Post-Racing-Stress-Disorder) 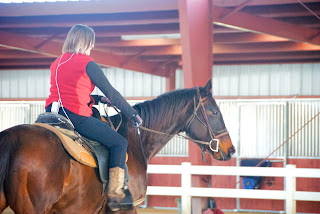 Learning to wield a Dressage whip

Conventional wisdom says no. Horses are always in-the-moment, they don't remember past events--bad let alone good. Do I believe this with my whole heart? It's a good concept but I've been having trouble with it the last week or so.

What I do know is that something triggered hyper-sensitivity in my horse--the weather, the air pressure, some hidden shift in the universe, something. What I don't know is what it is, what it all means, or how to balance it all out, yet.

I do know it seems to have started with the Dressage whip, which we've been using to help Bar be aware of--and move from--his hind end. No, I do not beat him with it--in fact I hardly manage to be coordinated enough to touch him with it most days. He has been totally (totally) fine with it waving, tapping, swinging around, etc., for weeks now. Weeks! He even began switching directions when he felt me change whip hands!

We were working in the indoor and he'd actually been pretty lazy. Steve and Lena were outdoors and it was a lovely, sunny--if a little breezy and cool--day. We were working nicely when I asked Calabar for a small circle and tapped him with the whip to get his hind end engaged. We then did indeed manage several small circles, all very rapidly--some might call them pivots--with a jig or two tossed in for good measure.

This is not normal. Calabar does not pivot. Ever.

He is not a particularly sensitive horse when it comes to moving away from or responding to pressure. Lena steps out of your way if you look at her and moves between gaits with the slightest request. Bar usually takes a nudge or two to step out of your bubble or pick up speed--hence the introduction of the Dressage whip. Yet suddenly the merest tap turned him into a Thoroughbred tornado.

He twitched every time the whip touched him. He shook his big head, too. So, yes, I tossed the whip and he responded politely and quickly to every subsequent request.

After we were done and I was back on the ground, I picked up the suddenly-evil device and patted him with it, rubbed his big brown self with it, scratched his head with it and all was good--until I actually waved it. Flinch. Huge eyeballs, showing lots of white.

Let's keep in mind I have never hit this horse hard with anything, certainly not the whip. (He did run into my forearm a few times early on when he thought it would be fun to try and bite me.) He is usually quite nonchalant about things waving around him and his body and hasn't physically flinched in months.

So what the heck?

I don't actually know, yet. I do know he was more tense with the whip whistling down his right side than his left, but that could be incidental and totally unrelated to his racing days. I know he zipped around the round pen at a 45-degree angle two days later, despite my best efforts to relax him. (It even involved singing.)

There is more to this story for sure. I did stay on and we did continue our workout on Sunday, but the oddness of the experience has me saying, "Hmmmm."

Time to get into that Thoroughbred head a little. Or maybe a lot. Best part about owning a horse? Figuring out the latest dance.
Posted by Jessica Boyd at 8:27 PM

I think horses can absolutely remember things from the past... good AND bad. That's why abused horses tend to be harder to work with. Why COULDN'T they have PRSD?