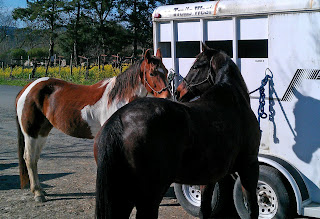 Normally, trail rides are our mental break from training, but every ride presents an opportunity for training, right? Yesterday was no exception, even though the location was definitely not on the physically-challenging side.

Not a physically challenging ride, no, but full of people, dogs, children (smaller versions of people) and other mentally stimulating terrors. Lena spooked sideways about 5 feet at a log. It wasn't even moving. Calabar started to follow her lead--though he spooked in place--then looked around to see what all the fuss was about. A log? He was nervous because Lena was still snorting, but we walked up to it and he proceeded to grab it with his teeth to prove he was bigger and stronger, I guess.

However, because our horses are in such good shape, the flat oval was not doing much to let them blow off steam. It's kind of nice when he's up like he was because it gives him a great walk. Nice and forward, big swinging strides--almost as good as a trip to the chiropractor. However, it also meant distracted boy and that's not so good.

So we would side pass back and forth across the trail and that worked for awhile. I was practicing keeping my hands quiet and low and moving with his front feet, like Ellen taught us. Steve said I was sitting my horse much better than the last few times we went out, when I instead curled up like a fortune cookie in the saddle.

Near the end of the ride, Lena got a little pokey, so Calabar and I ended up in front by quite a ways. That being the case, it seemed that practicing our circles and turns at the walk was a good way to get his attention. Turns out (ha), it was. By the time we finished the ride he was relaxed enough that a busy parking lot didn't phase him, despite being surrounded by some rather poor driving. Someone actually pulled into a parking spot right behind us and that Steve and Lena were partially in--hello?? How do you miss a 1,200 pound spotty horse? Luckily, they did miss.

But back to the ride and the training opportunity. As I've said on many occasions, trail riding is what saved Calabar and me. As odd as it sounds, I feel safer with him on the trail, likely because that is not where our most serious accidents have occurred. Feeling safer translates to riding softer and more relaxed. That helps him mentally, but it also means I'm in a better space both mentally and physically to react to something he might do. Yesterday, instead of tensing up when Calabar got bouncy (inflated, larger, etc.), because of the work we've been doing, I was able to take that energy and gently redirect it and him back to me.

Of course, just being out on a sunny day with Steve and the horses is a beautiful thing for all of us, training or no training.
Posted by Jessica Boyd at 11:07 AM