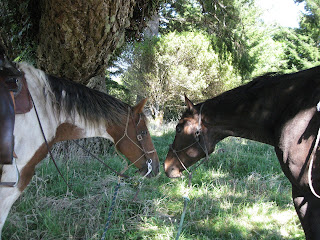 Not quite a mirror image

Spots aside, Bar and Lena are very different horses in many, many ways--from their foundation training to their movements to the things that set them off down goofy horse lane. Riding both of them this week has reminded me there are things each one can teach me about riding, things that help me ride the individual horse better but also translate from one to the other in some interesting ways.

In all honestly, the 2010 broken arm thanks to Lena shook my confidence and comfort level almost as much as the last trip off Calabar's back, almost exactly a year later. She was supposed to be the "easy" horse, after all.

It may even be that Calabar became my excuse to not help out with Lena more, and I certainly sank most of my time and energy into training him, teaching him to be my horse. Besides, between Steve and Katie, Lena was getting enough exercise. Or she was until Katie got her own horses. I would ride Lena occasionally or do ground work with her to help her get a little more exercise, but Bar was always my priority.

Being blessed with some additional time these days, it seemed that Lena deserved some of my attention. There was more fear to work through than expected, but once it was stuffed away for that moment (by moment by moment), the joy of riding a horse who knows how to do things I actually know how to ask her to do returned.

We had hit the indoor arena a few times when the outdoor arena was too wet, but the other day it was sunny and dry and beautiful. Thud, thud, thud. That's the sound of my heart in my chest. The outdoor arena and I are not friends. Especially where my left arm is concerned. Keeping Lena contained is fairly easy in the indoor, but the outdoor means--in her brain--a good run, something I'm still working back up to with both horses.

She tried to take off a few times, but found that it resulted in smaller circles which are much harder--despite the fact that she is an extremely athletic and powerful spotty horse. It is so beautiful to work with a horse who knows what a shift in weight means, knows her own balance, knows to pick up an inside shoulder when the inside rein comes up, knows how to give to contact.

I felt good, balanced in my seat and my feet. The confidence began trickling back. This in turn allowed me to give her more room to move--a little more, anyway. It was also good to have been taught by another horse to recognize the try, and to--quickly--release and soften my hands in response to that try so she and I could communicate instead of argue.

On the flip side, riding Lena helped remind me what a balanced horse in the right frame feels like. That reference point gets me ever closer with Bar so we can move from, "No, that's too bouncy, you are not using your hind end." to "Yes! That's it." Even if the latter only lasts two or three steps, feeling it faster is easier and feeling it faster means I can reward him for his try sooner. That positive feedback loop is so crucial for him to help with frustration avoidance. (His and mine, truth be told.)

The contrasts between the two horses are many. Neither horse is better than the other--they are merely different and know very different things. Bar spooks less on the trail because he's seen more. Lena is more balanced and knows more about how to be a "normal" riding horse.

Both offer lessons and constructive criticism, both continue to teach me much about myself. It is beyond lovely to be riding two such fine ponies.
Posted by Jessica Boyd at 6:06 PM

Email ThisBlogThis!Share to TwitterShare to FacebookShare to Pinterest
Labels: back to riding, Calabar, horse personalities, learning to ride, learning with horses, Lena