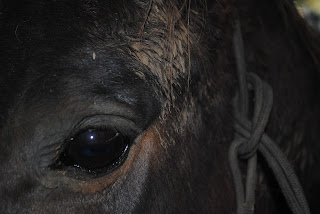 I have earned this soft eye and his trust. Yippee for me!

I admit it. I'm addicted. Obsessed with the belief that OTTBs can do so much more than retire to pasture and make babies. It requires patience, training (in all kinds of simple things, sometimes), and knowledge of where they have been so you can help them get where you want them to go, but it is a realistic and attainable goal.

So of course, I'm following the Retired Racehorse Trainers Challenge with much interest and quietly rooting for all of these beautiful athletes. My faith is huge, but OTTBs have a stigma attached to them like stink on a skunk.

They're spooky. They're crazy. They don't know anything and, above all else, you can't retrain them to do anything else.

Obviously, I disagree. But so apparently do Kerry Blackmer and Steuart Pittman. She says, and he concurs, that OTTBs have seen so much and have such a strong work ethic, they are actually EASIER than a lot of horses to train, let alone retrain. Here they are, making all the points I'd love to have the credibility to make. Maybe someday, right?

She said it, not me. Of course, a little professional help could have saved me a few spills along the way, but for all of that Calabar is willing to learn. He doesn't always get it and sometimes he doesn't do exactly what I'm asking, but he tries. Oh how he tries. He tries so hard it may be that his owner needs better aides, better ways to ask for the right thing.

But enough about me and my failings.

While it's important to give them down-time after the track, I'm not sure that means simply turning them out to pasture. They need to be handled and talked to and walked. They need their feet picked up and to get baths that don't follow workouts or races. They need to first learn to be normal, but they also need something to do with those big busy brains. This challenge, with the accelerated time-frame, shows what can be done with a sound horse off the track in merely a few weeks.

For the rest of us, who maybe have a little more time, the possibilities are rather endless but it is good to start with some simple things.

When Calabar first came home, he had no idea how to stand still in the cross-ties. He danced, he spun a little, he once ended up facing the entirely opposite directions. After a lot of cross-tying, including doctoring various wounds along the way, he now cocks a back foot and nods off most of the time. I can't recall exactly when I noticed the dancing had stopped, but it has stopped. Completely.

They also need to learn that work doesn't mean racing. Even if they liked racing, as many of them do, it's good to teach them that sometimes work is a hack out on a trail. Give them the horizon, the space to see what's around them--not blinders, not the horse right beside them, not the next barn over--and watch them start to breathe and relax into the next leg of the journey to horse they can be.

And they will try to be whatever you ask of them, so be sure to ask respectfully, with love and patience and sensitivity. Not to mention a little (or big) push when they need it.

It is so very worth it when that extra-large Thoroughbred heart belongs to you.
Posted by Jessica Boyd at 7:36 PM

Great post! I need to start taking Quad out for long walks.

I completely agree with you about OTTB's and I am totally addicted to the RRTP's video's and updates. They are giving me great ideas to work on with my busy body guy.