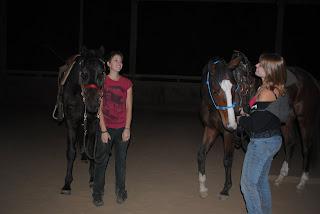 Two of the four
Sounds a bit like a recipe for disaster, doesn't it? Especially on a crisp fall evening--all the excuse a horse needs to act like a wild and fierce war horse. One other horse used to be enough to send me back to Bar's pen without working him, but after his antics the other day, I knew we had work to do.

Luckily, it was a bunch of other Thoroughbred owners and their horses, including Manna and Katie. They tend to be on the forgiving side when someone gets a little raucous. Oh, and they don't usually blame you if their horse acts up--in fact, there is often laughter and camaraderie instead of huffiness and condemnation.

Bar looked into the arena, saw all three other horses and riders and those brown eyes got really big. I let him watch for a second, then opened the door slowly, warning the one woman I haven't had him around that sometimes he gets a little dramatic. She chuckled.

Right. These are Thoroughbred owners. They like a horse with that buzz going on. In fact, they actually prefer it.

I wasn't brave enough to ride with all the cantering and energy out there, but I did work him in the round pen and he actually did really well. Even Katie said so. He stayed focused on what he was doing, with only a couple minor lapses into slightly frenetic behavior--generally when Romeo was cantering around the outside of the round pen. Very distracting, apparently. In fact, the third woman commented that he looked really happy! Yay! Then she laughed when he started bucking and showing off.

Maybe we should work with Thoroughbred people all the time. It will be good for both Bar's confidence and mine.
Posted by Jessica Boyd at 8:33 PM

Having people around who don't freak out every time your horse does something interesting, is so relaxing. If I have have spectators that I have to reassure every time my horse misbehaves, it enormously adds to the stress of whatever I am trying to do. Sometimes I just end the session the moment the horse does something even only halfway right rather than continue.

It sounds like you both did really well. The more you and Bar get in there and mix it up the less traumatic it will be for him. It's nice that the other owners don't mind his antics. I think he just has to get used to riding with some company. Have fun.

The idea of being around other people who laugh and have fun when their horses are "feeling good" is so much more relaxing than being around people who worry way too much. It sounds like a lot of fun to be had in that arena!!

Good on you for sticking it out. I don't really understand where people get the idea that TB's are any more excitable than the next horse. Admittedly, I only ride half of a TB, but have been around full blooded TB's and just don't see it.

When I think of psycho horses, a completely different breed comes to mind. But I'll hold my tongue.