As it happens, Katie showed up just as I was getting Lena out so we all went down to the arena together--Katie, Forrest, Lena, and me. Lena was a little, um, flirtatious but Forrest didn't seem to mind much once he got used to her slightly over-bearing manners.

Forrest did wonderfully, though he got a little bouncy watching Lena in the round pen and chased her around on the outside of the round pen. (It was sort of cute, actually.) He walked over obstacles nicely, and--it pains me a little to admit this--Forrest seems to be more confident and better with his feet than Bar is. Bar has improved immensely, but I think Forrest does not get as distracted by his own energy as Bar does. And because I'm now feeling horribly disloyal, I will say Bar is much better with his feet on the trail than in the arena, so perhaps it is boredom in the arena as much as anything.

At any rate, all guilt aside, it was a fun way to end our very eventful weekend. And for Forrest, it was an ending that was much better than it could have been for a day that started out with an escape.

Following in the footsteps of his new herd mates, Forrest appears to be an escape artist. When Steve and I got to the barn earlier in the day, we were greeted with stories that Katie had left Forrest's pen unlatched and the boy had done what boys do--run around checking out the neighborhood. Now, Bar did the very same thing two or so days after we got him--nearly ending this story before it began because someone (yes, me) freaked out a little bit. Katie knows that story and it was on her mind yesterday, plus I'm fairly certain she would not still be employed at WCS if she left gates unlatched all the time.

However it happened, Forrest ran loose for a little bit, but unlike his Uncle Bar, he didn't hurt himself and he was fairly easy to catch.

This is the face that greeted Steve and me. "Who me? I would never escape." 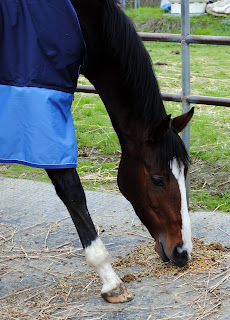 All three horses now have dual chains on their gates because I have nightmares of all three getting out. At once. That would probably make headlines. And not in a good way.
Posted by Jessica Boyd at 7:12 PM

I think I'd faint.

Glad he was no worse for the adventure...

I think all of our horses have been on the lamb at one time or the other. Ellie ended up at the organic farm next door on one occasion.

I wouldn't get caught up comparing Bar to Forrest, or vice versa. It wouldn't be fair to either of them. Their training, experiences, temperaments, etc, etc, are very different. Like us, they are individuals. Each will excel at different things.

But you know all that, so I'll stop preaching to the choir.