My favorite On-Track Thoroughbred comes back to racing 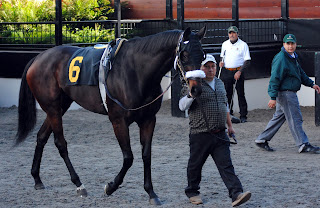 The friends we got Bar and Forrest from are still in the racing business, and their big mare came back to racing today after a six month break to recover from an injury. She is my favorite On-Track Thoroughbred, so we took a trip down to Golden Gate Fields to go to the races and support her.

Sittytofitty is a big girl. Over 17 hands and absolutely beautiful. She's a distance horse, tends to come from behind and start devouring track with her long, powerful stride. She hasn't won her first race, yet, but has nearly always placed in the money.

Besides her size, the other thing you notice about Sitty is her sheer presence. She is there, calm and paying attention, watching as things unfold around her. There is not a mean bone in her super-sized body. 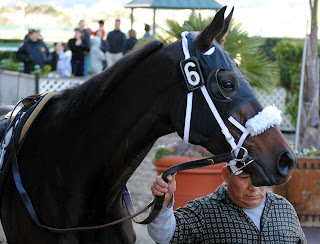 She was ready today and, at five, the oldest horse in her race. It was a mile race, originally scheduled for turf, but moved to the outer track due to weather. She broke well, then settled towards the back as is her norm. She made up ground on the final stretch and ended up fourth, a nose behind the third horse and only a neck behind the second horse. The odds-on favorite, ridden by the favorite jockey, won the race. 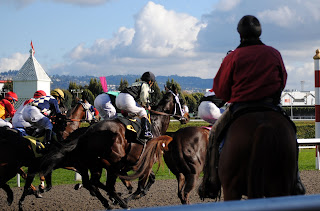 Maybe fourth sounds bad to you, but if you'd seen her run, you wouldn't think so. She looked great. Strong, confident, and ready for more at the end--she really does love to run and looks darn good doing it. A few more strides and she'd have had 3rd if not second. And for a first race back after six months, none of us could be happier for her. 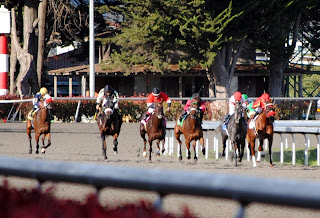 Sitty is second from the left
It was obvious she felt good, too--with her ears up, eyes flashing, head tossing, and tail swishing as she walked it out after the race. She actually got picked (along with the winner) to go to the test barn. Since her odds had been 33:1 early on, her strong finish meant she had to pee in a cup. (Which--in case you're curious--racehorses do on demand.)

She, however, thought it meant it was time for her photo shoot. 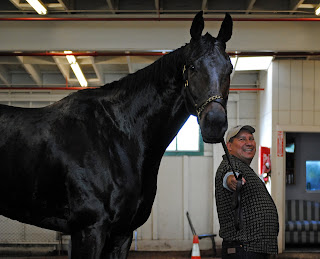 Damn! She is a beauty.

How does someone get on a 17HH horse, anyway? I find 16HH to be challenging to the knees these days.
:)

WOW she is stunning!

Do I see a new horse in your future?
Beautiful pictures!!
:)