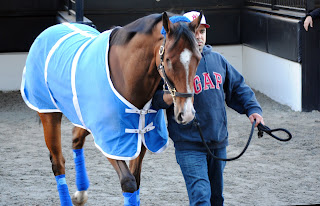 When we were at the track last weekend, I saw a curious thing--a one-eyed horse in the paddocks before a race. Devon said he was being schooled, and I'm pretty sure he didn't actually race, but it made me so curious about his story. (Her story? I saw the eye, but not much else.)

I would also submit this as evidence that not all racehorse owners and trainers will spit out a horse that isn't a winner, or even a prospect. Maybe I'm way off here, but this horse has got to be a long shot by any stretch of the imagination. And yet there he was, being handled with care and concern, just to teach him whatever lesson was in the offing that day.

I want to know who this horse is, know how he came to be missing an eye and how it is he is still on the track with such a shiny coat and attentive handlers. The gentleness I see in the way he's being handled below, the attention he's being given, speaks volumes. 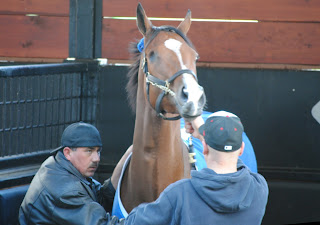 I may never know what his story is, but he has certainly given me something to wonder about.
Posted by Jessica Boyd at 3:04 PM

Can't wait for you to find out who he is and post an update!

We went cow sorting yesterday (blog post to follow when I get my hands on the video). There was a lady there riding a one eyed dun QH. Nothing about the horse belied this fact until you got a close look at the eyelid that is permanently shut. I wanted to ask, but did not, as I suspect she is probably tired of answering the question. Looked like a good horse to me.