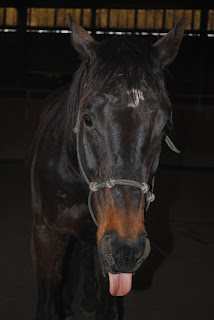 Bar gave me a gift last night, one that washed away all the stress of the work week and told me the journey he and I have taken--all the ups, downs, bruises, and scrapes--has been worth it.

He asked me to get on and ride.

It had been a long week, and I'd already missed two nights at the barn when I called Steve to say I'd be late again and to eat without me--I really needed my horse fix.

It was dark, cold, and rainy when I pulled in and the arena lights were off. I had planned on just patting Bar and giving him some carrots just to let him know I was indeed still on this planet and thinking of him.

But he wanted out. He came splashing through the mud, nickering at me, asking for head scratches and carrots. I slipped the halter on and down we went (after blanket removal) to the arena--rain on our heads, water under our feet.

As we walked into the arena, he started to do his spin around thing--I even felt him expand in size right there next to me (Thoroughbreds can do that, you know). And then, when I didn't react, he.. just.. deflated. Not in a bad way, just in a "well, maybe I don't really need to do that tonight" way.

So instead of heading to the round pen for our normal routine, I unsnapped his lead rope and gave him the whole arena. He rolled, he ran, he bucked, he farted. He would come towards me and veer off, never once invading the bubble.

I sat down in the dirt, back against the round pen (which for those who don't know rests inside our already crowded indoor arena) and watched him. He was beautiful. Picking himself up over and around the ground obstacles, spinning on his hind end, rolling and throwing up clouds of dust he would then snort out of his nose.

I wasn't even thinking I'd get on and ride until that moment. I was just letting things play out to see what happened. It was enough to make both of us think, and since I didn't do what he expected, he didn't do what I expected.

I snapped the lead rope back on his halter and looped it around, then led him back to the mounting block. He let me get on from the wrong side, checked to be sure he had a leg on each side, and off we went.

We didn't do much, just some walking, side-passing, and backing, but it was one of the best rides I've ever had because he asked for it. Now maybe he just thought this was what he needed to do to get back to his pen. That's okay. It was still communication. I got it. He got it. It worked.

One of those "Aha" moments for sure. Not to mention warm snuggly moments when you know you've made a connection with your horse. Almost nothing sweeter than that, my friends.
Posted by Jessica Boyd at 10:32 AM

That is one smart horse! Love, Mom

Horses are pretty smart for as dumb as they can sometimes seem.

I'm fairly certain that the only thing Smokey has ever said to me is "got any treats?".