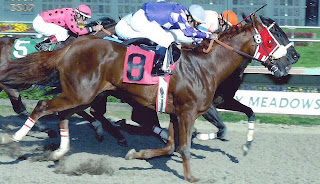 Calabar by a nose--giving #8 the eye

Bar was off the track for three years or so when we adopted him. I've watched all his races (more than once) and I know how he ran. Fast, by the way. I know he was a sprinter, not a long-distance runner. He excelled at 5-1/2 or 6 furlong races--unless there was mud. Even now, he dislikes mud. On the track? Messing with his footing? Forget it.

But I've never seen him before a race. Or after a race. Never seen him load into the gate or parade around while the bettors decide if he's the one who will win.

Watching Forrest and Sitty makes me wish I'd known Bar longer, before he was mine.

I've seen Forrest before his first race, getting ready, parading. I've watched Sittytwofitty eyeballing the crowds and her competition, standing calmly while being saddled, confidently heading out to the track and loading into the gate, ready to go.

What was Bar like? Was he calm? Was he he wired? Was he the one bouncing out of the paddock while the other horses paraded around?

I will probably never know, and it probably doesn't matter. Okay, maybe it matters a little. Because I love this horse. Because I want to know more about how his brain works so we can work better together.

Then again, I'm pretty far along in figuring out how his brain works so maybe it is all about moving forward from here.
Posted by Jessica Boyd at 7:32 PM

I often think the same thing about Miles...he raced most of his career in Chile so I don't even have video of those races-and he was a Co-Champion Miler in 2004! :) I would give anything to watch him run some of those races.

I did find video of him running at Santa Anita (with one amazing last to first win!), but I agree, I would have loved to see him before and after the race-watch his demeanor, see how he behaved in the paddock. I'm so curious!

I think you're way ahead of the game with Bar. Most people who get a horse after they've raced know nothing about them. Maybe they won, maybe not, there's always a lot of questions. You were lucky enough to see some of his races. That's great.

Like you say it matters now what's in his brain. He's in a totally different situation than he was, so he would probably act different for each place and situation he was in anyway. I don't think it matters anymore. But it's nice to know a little history too.

That is a great photo. The thing that caught my eye (aside from how amazing Bar is) is the look that the black horse is giving him. That's some stink eye if I've ever seen it.

It's already been noted that you are ahead of most. You know what he did in life before he came to you. Smokey was 16 and had been through multiple owners when I bought him. Trying to figure out what he's done, and what he knows is a non-stop challenge.

He is such a cool horse, and I am lucky to know as much as I do about him.

Great comments and feedback all the way around!