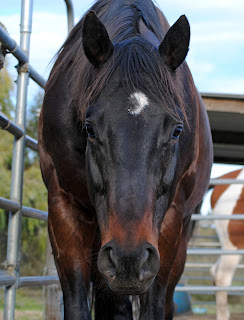 I never want to hear "Thoroughbreds are all x-way or y-way" again. Not that I wanted to hear it before, but I got to witness first hand just how different two ex-racehorses can be today.

No worries, there were no injuries, but there was spinning and dancing.

Not, however, by Forrest. He was an absolute angel, despite being very nervous when the saddle went on and the bit went in. 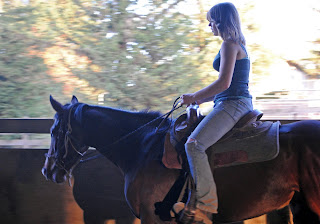 It was Katie and Forrest's first ride today, and Katie did a great job of taking it very slowly. First she hand-walked him with the saddle on until he relaxed, then added the bridle and did the same. Only when he stopped chomping on the bit did she get on, and then she held him to a walk. Same deal, walk until he stopped chomping on the bit and relaxed, and then she got off. It wasn't even particularly hard to keep him at a walk, though at first you could tell he was waiting for her slightest signal to move faster. They even had to deal with a horse in the round pen and he was great. 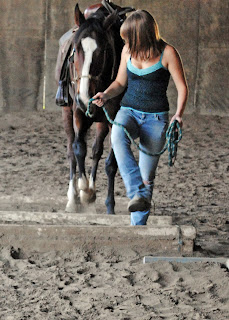 Enter the "seasoned" horse, the one who has been doing all of this much longer.

I saddled Bar, kind of eager to get back on and actually ride after being off for four weeks or so after the rib incident. I wasn't planning on riding hard, just working on our side passing at the walk and trot, plus the ever-important stop-and-back.

Peter warned me he had two more horses to lunge, and brought the first one--a gray--into the round pen. In the meantime, one of the other boarders had come back from a trail ride and had a horse in their trailer calling out.

He did this a couple times, then when he settled down by the wall furthest from the round pen and relaxed, I gave him a carrot. Yes. You get a treat for not being a spaz. Hm, he said.

Then Peter brought in the next horse, who proceeded to buck and fart and was a louder horse than the previous one. So we had more dancing and more spinning, so more circles. Then he relaxed again and got another carrot.

At this point, I knew Bar needed to move more than my ribs were ready for so I unbridled him and took HIM into the round pen. He approached it with wide eyes, certain that all the ruckus (though it had ended by then) was a demon about to consume him whole. So we went in to confront said demon and to see where the boy's head was, since it was not 100% where it needed to be--with me. Heck, I'd have settled for 80%!

Lunging won't tire him out. That's not why I do it. I wanted him to relax and focus and I can see that better from the ground right now. He did, and I got back on. We worked on the things I wanted to work on before the shenanigans and he did everything I asked. Perfectly.

In other words, one Thoroughbred--off the track within the last month--handled a stressful situation with less drama than another Thoroughbred--the one who has been off the track for six years. But I was able to bring Bar back and get him focused on work.

Yes, I am comparing the two, but not because I think one is better than the other. They are different personalities. Completely. Just like people. Maybe as different as Katie and I are from one another, even.

Devon told us Forrest was more easy going and easier to handle than Calabar.

I love my horse. He teaches me more every time I ride him. Today he reminded me I need to pay attention and notice when we are entering into interesting and possibly stressful situations. That's when I need to calm down, when I need to give him the best I can give him.

Forrest told Katie the same thing, he just was a little less dramatic about it.

Forrest is Forrest and Bar is Bar. They are indeed both Thoroughbreds. They did both come off the track. But to say one is like the other is to miss the nuances and specialness of each. To say they are the same is to miss what both of them can teach each of us.
Posted by Jessica Boyd at 9:20 PM

So many people are ready to attribute characteristics to breeds, but each horse is an individual and breeds have wide spectrums of personalities and abilities.

This was a really great post! I couldn't agree more. So happy Forest's first ride was a non-event, and that Bar came back to you:)