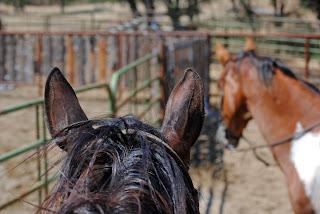 Steve and I are relaxing in the living room and Calabar and Lena were last seen munching grain in a most contented manner. Calabar did have to do a corner-to-corner inspection of his pen ("Is this my poop?") and a good hearty roll, but all indications are that the normal accommodations are acceptable.
This trip was incredible. Not only because it gave me a much-needed mental break from work, but because it really showed me my horse. Cheri said the difference the work we have done together is obvious, which made the weekend complete. The best part was watching him absorbing the action--totally transfixed, very curious, but not really afraid. Okay, the really best part was watching him drop his pretty Thoroughbred head, pin his ears, and give cows the stink eye--just like a real (and really tall) cow horse.
One of the other this-will-hopefully-stick-in-my-memory-forever was watching Lena and Bar move in tandem in the big arena. I caught just a snippet on video, but they are so lovely together. Like four-legged figure skaters, matched in movement, balance and cadence. She does, however, stop better than he does. (The video may not work, but I'll try and if not, try again later.)
Such a great trip, such a needed break for all four of us.
And tomorrow, it's back to the grind. I guess I'm ready, though the temptation to run off and be a cowgirl is awfully strong.
Posted by Jessica Boyd at 5:01 PM