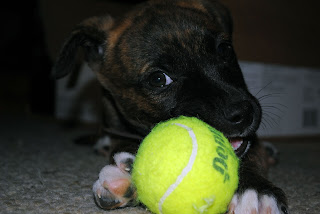 Remy--back when he was even cuter than he is now
Ever since Katie brought home Remy the wonder-dog, we've all been exposed to various dog training methodologies. Mostly, Remy is in the right place to become a well-trained dog. We are pretty clear with the rules and cuteness is not a hall pass for bad behaviour. (Not that he doesn't totally try to work the cuteness angle, of course.)

As it turns out, horse training is good practice for dog training. The dynamics are a little different--being that dogs are hunters and horses are prey--but the fundamentals are essentially the same. You need to go into it with confidence and consistency, as well as leadership, and anything a dog can do a horse can do bigger.

In our case, it is very important to have Remy well trained because he will be a big dog and has the looks of an aggressive breed. Unfortunately, not all dog owners seem to follow this philosophy, and while the big dogs are, well, bigger, the little dogs seem to get away with worse behaviour. Steve and I had the chance to experience both this morning when we took Remy out on a walk--it's a good thing he's well trained, at least.

We live above the Russian River and even off-season, there are lots of dogs out here. During the summer months, we get lots of "foreigners" added to the mix as well.

On his walks, Remy is allowed to notice other dogs--usually behind fences--but to keep moving along on our way. Depending on the demeanour of the owner/dog combination we encounter outside the fences, there can sometimes be introductions.

Of all the dogs we ran into today, the worst was a Pomeranian who is a local. She made demonic noises and charged poor Remy, who had the good sense to give her wide berth. Her owner said, "Oh, she's the pack leader," as if that made it okay to have this evil presence living at the end of her leash. Personally, I don't care how "cute" your dog is, it needs to have manners. And the reason the little fanged cotton ball is the "pack-leader" is that her owner isn't, so she has to step in and take over. That is never good for the dog's well-being, and that little fluffy devil will hurt someone someday. The only thing that will save her from being put down is that she isn't considered one of the larger, "bully" breeds and so she'll probably get away with it.

Case in point was one of the other dogs we met this morning--a Pit Bull (or mix) out with his two humans and their two smaller dogs. His owner at least had the good sense to wrap him in a bear hug when he charged at us, but again--wrong message for that dog. I have no issues with any of the "bully" breed dogs and in fact think they can make great pets--as long as their owners get the right training to be responsible caretakers for them. This dog got the message that he gets restrained (which is claustrophobic) whenever another dog comes into the picture, so therefore any other dog is a threat. It's either that or he receives physical attention when he acts aggressive, which is also not the right message. However, had that dog been allowed the lee-way and lack of discipline of the Pomeranian, he'd have been locked up or put down.

Whatever training method resonates with you--be it dog, horse, or cat (and good luck with that)--your job as their owner is to keep them safe. Part of keeping them safe is training them to be part of society--other dogs, other humans, cats, horses, whatever their environment is. You keep them safe by teaching them manners, how you expect them to behave, and correcting them when they overstep the boundaries. If you think it's too "mean" to discipline your dog, think of how it will feel to put down a dog you love because you couldn't control it enough to keep it from hurting someone else.

And that's enough heaviness and lecturing for one day, folks. Thanks for reading and--as always--your comments are appreciated.
Posted by Jessica Boyd at 1:12 PM

As for cats, I inherited one in October 2009, and he was already trained to walk on a leash. He also got away with sneaking out the door several times a day, running right over here and pawing at the door to get in. We live in a mobile home court, and it is not safe for a cat to roam. So we work on taking walks when the weather is decent. The other day, he ran me through a swarm of mosquitoes. But he is quite good about not dashing out the door when people are going in and out. I say, "No. Naughty." And he moves back from the door. It's too hot to be outside much, and Junior is getting fat and has a heavy coat. It is my fault that he is getting fat, because I feed him too many treats when he asks for them. But he is a wonderfully funny, undignified cat. Mom

Amen Sistah! Amen! I walk the same path as you! It makes me crazy to watch folks "allow" their dogs to be badly behaved 'cause they're cute and everyone should love their cuteness.... Makes me as crazy to see horses bully the owner... I know that most likely the problem exists with the owner.