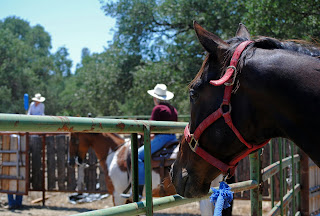 Can't I go in there?
We had an awesome day today. Lena got to help with real cows and Calabar got to show people even crazy ex-racehorses can stare down a cow or two. Or seven. Maybe more, I lost count.

Getting the two of them in the trailer this morning was a bit of a challenge, but we prevailed. ("Why are we leaving? We like it here??")

Then we rolled down the road about an hour to the other property in Jamestown to see if Lena remembered cows and if Calabar could deal with cows. (Racetracks, after all, don't have a lot of cows wandering around.)

I was only a tiny bit nervous. I mean, what could go wrong besides everything?

It turns out my horse is a budding cow horse in racehorse clothing. Who knew? Oh, right. He did.

The first thing they got to do is run loose in the huge, round custom arena Ike had built specifically for cow work. The outer arena (all welded pipe) is 150 feet across, with the cattle pens attached to the back side. The cattle pens then open directly into the inner arena, which is 80 x 100 feet, and can be closed off to work cattle inside.

It's awesome. The footing is deep sand and the big sprinkler was going around overhead like a big, soggy, automatic lunge whip. Lena and Bar took off together racing each other and the sprinkler. They were beautiful and graceful, breathtaking to watch. Did I have my camera? No. I did go back down to the truck to get it, but by then they were mostly done blowing off steam and rolling, except for one full speed dash by the ex-racehorse that I was too slow to catch. Besides, I think that would be akin to stealing his spirit and the photo would never have done it justice in any case. Or so I tell myself, anyway.

Then Ike had us take them up to where they could see the cows from the other side of the fence. Bar blew a little, but didn't spook or move away, so the next step was to take them in with the cows--all still with Steve and I on the ground leading our respective equines. Lena went right in, of course, and headed right to the middle of the herd without batting an eye. Bar walked in with me fine, and the cows obligingly moved away from the big, brown horse. He and I stopped and watched Lena, then Ike had Steve and Lena push a couple cows towards us to see what Bar would do. Stood like a rock, did he, and so he and I walked forward driving the cows back to the herd.

We took them back down to the trailer and saddled up, then went back up to the nifty arena, working alongside Cheri, Tiffany, and Linda (another Slide devotee) as they warmed up the other horses.

The other new thing for Bar (besides the bovine component) was being around this many new horses all at once and not being on the racetrack. Surely the various spotted horses gave him some comfort, and I was able to keep him mellow and trotting even when other horses came loping up behind him. We only had a couple minor arguments about it--particularly when Lena would lope on around him--but I wanted him to listen to me instead of going along with the crowd and he did. 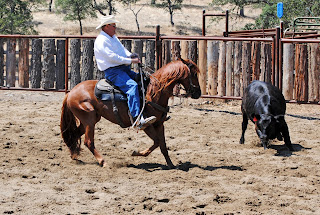 Ike on Tango
Then it was time to work cows. Calabar, Lena, Steve, and me were initially relegated to the outside of the inner arena and I took a few pictures before nervous glances from Cheri and Steve made me put away the camera so I could be sure to hold on if anything happened. Safety before journalism, I guess.

The very first time a cow came close to us on the other side of the fence, Calabar proved I didn't have to worry. He arched his neck, dropped his head, and stared that cow right in the eye. He blew a little too, just for emphasis. The cow chose to go the other direction.

Lena just wanted to get into the action, and got to the next set of cows. 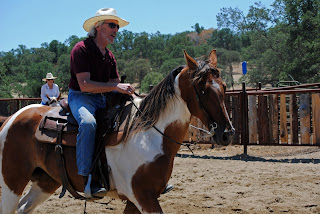 Cowboy Steve and Lena on the other side of the fence
While Steve held the right corner and Cheri held the left, Calabar and I worked the railing from our side. He never once stepped away, he never once spooked. Every time a cow came close, that big neck arched, that head dropped, and the cow went the other way. The ear pinning came next. I think he was watching the cutting horses and saw he was missing that part. He even banged himself on the fence once going for a cow.

At one point, while I was still in the saddle, he started to twitch and shiver. I got worried he wasn't feeling well and immediately got off to check him. He was fine and the general consensus was he'd built up a lot of nervous energy from so much new stuff and it had to go somewhere. I'm awfully glad it didn't go into bucking or spooking, but I opted to stay on the ground as his cow back-up after that. (Besides, then I could take pictures.) 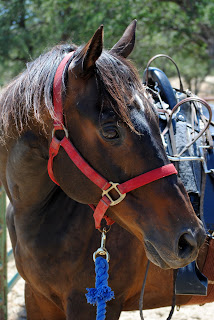 Calabar after the energy release with me on the ground at the end of his lead rope
After the trained horses had worked, Lena and Rain got their chance. Rain is owned by long-time Slide friends Dave and Linda. Linda and Steve started out cutting each other, which involved what would have been impressive horse ballet if it were planned as well as much laughter. Calabar was dozing a little at this point, since there were no scary cows to worry about. 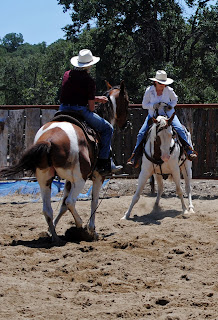 Cow horse ballet by Lena and Rain
Then Lena and Steve got to work a real cow all by themselves. As long a day as it had been for us so far, Lena and Steve did a great job and learned a lot about working together mentally as well as physically. 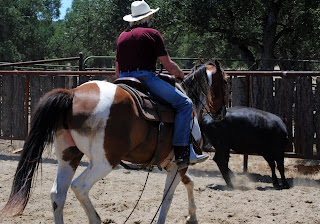 Lena Rey the fierce. "Run, cow, run!"
What an amazing day. Lena had so much fun and Calabar proved with a cow-horse worthy glint in his eye that ex-racehorses can do more than just run fast.

Lots of fun! Our Dawn, a OTTB, got to work cows the two summers we were out at the Mark Rashid week-longs in CO, and she really enjoyed it and was quite a good little cowhorse.

Looks like a lot of fun. Love the picture of Calabar.

Glad as always to hear that things went well, and the maybe Mr. Bar has bit o' cow in him. Cow work is fun. I've only done sorting, but I'm giving the eye to team penning. More room, and you get to go faster.