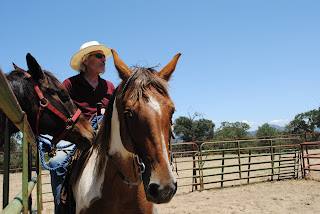 After yesterday's excitement, all four of us were moving a little slow today, so we all relaxed. Ike, Cheri, Dave and Linda were back down at the other property, so the ranch was quiet and we were lazy, lazy humans and horses. Calabar and Lena ate breakfast and promptly headed to the back of their paddocks for naps. Contrary to all the other days we've been here, they were not hanging out at their gates looking for the day's next activity.
Steve and I did rouse ourselves finally, after noticing some movement in the paddocks outside. We thought it was only fair to give them some down time after all we did yesterday, but when the pacing started, we knew we needed to get them out for a little work.
So we saddled and headed down to the covered arena--which has had some major engineering after this year's record snowfall--and did some very slow, very simple work. Walking, trotting, side passing into the corners, and the laziest loping I think I've ever seen either one of them do.(Why, yes, I did ask my horse for a lope--and he gave it to me. Grudgingly, but he gave it to me.)
And then came the best part as far as they were concerned. Rolling. Rolling a lot. The paddocks are on a slope and so rolling is a bit challenging, though Bar has managed. But the ground is a little hard, too, so the arena dirt was like heaven for both of them. I know Bar is a roller. It is his favorite thing next to carrots and a huge part of the reason he puts up with me--I always let him roll. Always. Lena must be, too, though I don't handle her enough to know how much she does or doesn't roll. Today it was a lot. Both sides, several times. Bar, too.
After we rode, we unsaddled and it took all of about 4 seconds for both of them to drop down and start the chiropractic process. I could almost here their spines realign. Not to mention the ecstatic groaning and full body shaking. No, there was no camera again, sorry.
Steve just did the same thing with his back using a step-down, and I'll probably do a little more yoga here in just a minute. I'm finding my body is not quite as supple as it once was. Drat.
However, despite the aches and pains, I'm actually not sure I wouldn't run away from work and become a ranch hand up here.
Posted by Jessica Boyd at 3:56 PM