As my closest associates know, the outdoor arena and I have been at odds for some time now.
It's big. It's open. It's a little scary (though it turns out more scary for me than for Calabar), and the ground is really, really hard. (It's where I broke my arm in 2010.)
But I really wanted to play today. In particular, I wanted to try what Linda and Steve (and Rain and Lena) did up at Slide--practicing cutting with each other--only with Bar and Lena this time. 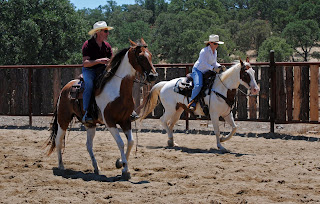 I had to breathe first, and that took awhile.
I warmed him up in the indoor arena first, then saddled and worked him a tiny bit more on the ground inside. Then I got on him--still inside--loped around the round pen, lost my left stirrup, stayed calm and in the saddle and decided we were ready to go outside. Well. He was ready all along. I had to buck up and join him in the readiness.
My heart was pounding as I led him out to the outdoor arena, so I sang to him. To both of us. In this case, it was "Angel from Montgomery" by Bonnie Raitt/John Prine. The line, "Just give me one thing/I can hold onto/To believe in this living/Is just a hard way to go" has resonated since Remy died and reminds me that life is what you choose to make of it, so make it good.

Today was good. We didn't get up over a walk with our mirroring, but he listened. When we wandered around the arena, he responded beautifully (and promptly) to light leg pressure and side-passed whichever way I asked. He walked through narrowly spaced barrels and chased down Lena when I asked him to. He never once acted up or challenged me, though he did ask for clarification a couple times.

I think this means I need to trust him just a tiny bit more. That's what he says anyway.
Posted by Jessica Boyd at 6:53 PM

Email ThisBlogThis!Share to TwitterShare to FacebookShare to Pinterest
Labels: Calabar, learning to ride, learning with horses

Good progress! He sounds like he was a very good boy, which should be a confidence builder for both of you.