Back to why I do this 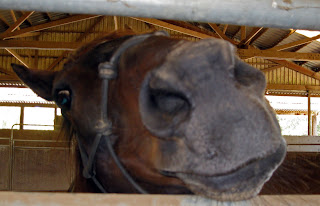 Found this lovely post about the "Heart" of a horse on Horse Junkies United and it made me smile. Zulu sounds like a certain OTTB I know, and--now that you mention it--a Paint Horse, too.

This is what makes me stick with Calabar. I know if I can just figure out how to ask him, or rather how to ask him so he knows what I'm asking, he'll do anything for me. That means I have a certain responsibility, of course, not to ask him to do something that is too hard on him or that over-reaches what he's ready for.

Trust. That's what it all comes down to, really. And he does trust me--even when he's not sure why on earth we're doing something.

He trusts me enough to let me hang on his mouth while I figure out this whole posting thing and not object too much. (Peter did point out that he is used to that from the track, but still.)

He trusts me enough to chase a moving fake cow on a string even though he's never done that before, and don't I know racehorses don't chase cows?

And it's not that he doesn't occasionally insert his own opinion into the conversation, he does. But when he does, there is usually a good reason--even if I don't know what it is. "Figure it out, then let's discuss," he says.

But this is a horse who looks to me first and is always willing to put his head in the halter.

This is a horse that two weeks after a hard fall in the arena, carried me up and over a mountain, through a swarm of yellow jackets, and down a truly difficult trail without a whimper.

I have come back to that one episode in my darkest moments, recalling the way he decided not to panic, dump me, and take off--even when being stung by multiple yellow jackets. The way he picked his way slowly and carefully down 18" drop-offs with his long, Thoroughbred legs--even though he was hurting and exhausted. And the way he nuzzled me when I realized he was too sore to carry me any more and got off to walk beside him.

He has already taught me a lot, and we have a lot more to learn together. He's willing, I'm willing, and we have miles yet to travel with one another. His heart--extra heartbeat and all--is only part of it. My heart plays a small part in this funny journey, too.
Posted by Jessica Boyd at 5:40 PM

This. Is. Beautiful. :)
Seriously, I know exactly what you mean. When a TB is with you, they are WITH you. Bar sounds like such an amazing animal...I'm glad you two have each other:) I know it's not been easy sometimes. Still, your love for this horse comes through in your words, loud and clear.

Bar is a wonderful horse. I do think he's really bonded with you and tries to take care of you. Sounds like you have a special relationship.

Just a thought about the leaning on his mouth while posting: if possible why don't you just grab mane or the front of the saddle (they make grab straps you can attach) instead of rein if you're trying to keep your balance. It might help.

That story was fantastic... Bar is a goodun' and your work is being rewarded!